The man who allegedly hurled firebombs at an immigrant detention center and tried blowing up a propane tank has been praised by the far-left, communist-rooted Antifa group as “a martyr” following his death.

The man set a car on fire before being shot dead by police officers on July 13 in Tacoma. He was later identified as Willem Van Spronsen.

According to a manifesto Van Spronsen left, he was a member of Antifa.

Various Antifa groups and extremists have been praising the killed man as someone who died doing something important.

Seattle Antifa Action has posted a eulogy & the ICE firebomber’s alleged manifesto on its Facebook page that was sent to friends before the attack. In it, he allegedly wrote: “I am antifa, I stand with comrades around the world…” pic.twitter.com/4rTDYDu0Xb

The Seattle chapter posted on Facebook: “When our good friend and comrade Willem Van Spronsen took a stand against the fascist detention center in Tacoma, he became a martyr who gave his life to the struggle against fascism.”

“He was kind and deeply loved by many communities; we cannot let his death go unanswered,” it added. “May his death serve as a call to protest and direct action.”

An article on It’s Going Down, the main news website for the extremist group, stated, “We understand why Willem Van Spronsen decided to give his life to interrupt the violence that is perpetrated against undocumented people in the United States every day.”

“Laws are just constructs. They have no value in and of themselves. They often serve to legitimize injustice that people would otherwise take action to oppose,” the author argued.

The guy who attacked the ICE detention centre was a 69-year-old anarchist named Will Van Spronsen. This is him. pic.twitter.com/TdNUM0Jqk5

Here is my video which captures Willem van Spronsen, the JBGC antifa militia member who was killed yesterday outside the Tacoma, Washington ICE facility. Police say he arrived with a rifle & began to firebomb the place & attempted to make a tank explode. pic.twitter.com/kPPlyiwVZl

“Willem Van Spronsen chose to think for himself. He took personal responsibility and did what he could to put an end to what he recognized as injustice. He did not use the Nuremberg defense to excuse his actions the way that every police officer and prison guard does. In those regards, what he did was heroic,” they added.

A number of Antifa-affiliated accounts on social media spread the narrative that the media and police were lying about the attack, claiming Van Spronsen did not hurt anybody and was only trying to destroy Immigration and Customs Enforcement (ICE) vehicles.

That took about a second to get the block
Here is the tweet fm @GrimKim advocating domestic terrorism by #Antifa pic.twitter.com/43p1grSqvg

“Mr. Van Spronsen was apparently trying to set the deportation buses on fire when he was shot and killed. His actions sadly reflect the level of desperation people across this country feel about the government’s outrageous violence against immigrants, which includes the use of detention centers to cage migrants both currently living in the U.S. and those seeking asylum,” La Resistencia, a group that says illegal immigrants should never be detained, said in a post on Facebook.

“This death results from the federal government’s unresponsiveness to the anger and despair people feel at the horrors unfolding both at the border and in the interior, and from the inability of officers to de-escalate rather than shooting to kill.” 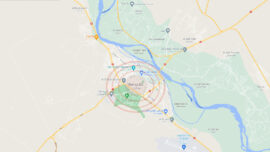