Rep. Paul Gosar (R-Ariz.) said that the election results in some states seem “very skewed” because of a reported election software glitch.

Gosar, who just won his re-election to Arizona’s 4th congressional district, said the election results don’t fall in alignment with his impression.

“It seems that it’s very skewed,” he said during an interview with “American Thought Leaders.”

However, the presidential election results show President Donald Trump and Democratic presidential candidate Joe Biden are in a head-to-head situation with Biden having a slight lead.

Gosar said one thing he suggested to check is the election software provided by Dominion Voting Systems Corporation.

“One of the things that we’re taking note of is the software. There seems to be a problem,” he added.

He said it’s very important to check the software to ensure American voters can be confident that the process was done properly.

“If there is a glitch that’s built into the software system, it’ll be shown and it’s easy to define that,” he said. “I think this is a great exercise to get back the trust of the American people.”

Antrim County in Michigan, which uses voting machines by Dominion Voting Systems, flipped from Democratic presidential candidate Joe Biden to President Donald Trump after over 5,000 votes were found to have been incorrectly registered.

County Clerk Sheryl Guy told the Detroit Free Press that the problem appeared to be a combination of a software glitch and human error.

The updated Antrim County results don’t have much of an impact on Biden’s lead in Michigan.

Dominion systems are used by a number of other Michigan counties, as well as counties in other states.

Dominion systems experienced a technical glitch in two Georgia counties on Election Day, which caused the machines to crash for several hours. Marcia Ridley, the elections supervisor at Spalding County Board of Election, told Politico that the glitch was due to the company uploading something the night prior, “which is not normal.”

Out of the 92 donations the Dominion employees made between 2019 and 2020, 80 of them went to ActBlue, 7 to Sen. Bernie Sanders (I-Vt.)’s failed presidential campaign, 4 to the Trump campaign, and 1 to the Democratic National Committee.

The donations are all in small amounts ranging from $1 to $250.

Zachary Stieber contributed to the report. 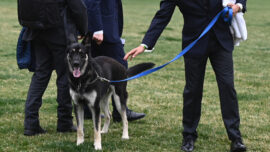 Major Training: Biden Dog Gets Help Adjusting to White House
Sign Up for Our
Newsletter
Success!
You are now subscribed.
TOP NEWS MORE +