A Georgia poll worker who said she has 20 years experience in handling ballots and recounts said in a sworn statement Tuesday that she noticed an unusual batch of ballots in which the sheets had no signs of use or markings, and approximately 98 percent were marked for Democrat Joe Biden.

Only about two of the ballots from that batch were marked for President Donald Trump, recount worker Susan Voyles said. Voyles filed an affidavit in support of attorney Lin Wood’s lawsuit against Georgia Secretary of State Brad Raffensperger in which she claimed that Raffensperger made changes to the state’s election policy, arguing that only Georgia’s legislature can make a change in a federal election.

Raffensperger has said on social media and in interviews that there is no evidence to suggest that fraud occurred on a wide enough scale to affect the election’s outcome. “My team secured and strengthened absentee ballots for the first time since 2005. As Secretary of State the first thing I did was push legislation that—OUTLAWED—absentee ballot harvesting in Georgia,” the secretary wrote on Facebook this week in a bid to dispute Wood’s lawsuit.

But Voyles’ allegations are sure to draw fresh attention and scrutiny to the vote-tabulation efforts in Georgia.

Georgia recount worker with 20 years of experience handling ballots described an odd batch that stood out. Pristine sheets with no markings and 98% for Biden.

Voyles said she worked at Fulton County’s Sandy Springs poll station and accepted the Fulton County Board of Elections’ request to carry out its hand recount of the election.

At one point, Voyles said she noticed a batch of ballots that “was pristine,” while noting that “most of the ballots” she observed “had already been handled; they had been written on by people, and the edges were worn,” showing obvious signs of use.

“These different ballots,” Voyles added, “included a slight depressed pre-fold so they could be easily folded and unfolded for use in scanning machines.” Also, “There were no markings on the ballots to show where they had come from, or where they had been processed,” she said. “These stood out.”

“In my 20 years’ of experience of handling ballots,” she said, “I observed that the markings for the candidates on [the ‘pristine ballots’] were unusually uniform, perhaps even with a ballot-marking device.”

“By my estimate in observing these ballots, approximately 98 percent constituted votes for Joseph Biden,” she said, adding that only about two ballots went for President Trump.

Georgia’s GOP Chairman, David Shafer, noted that one of his poll watchers found a nearly 10,000-vote error in DeKalb County where “one batch was labeled 10,707 for Biden and 13 for Trump,” which is “improbable … for DeKalb standards.” Shafer said his attorneys turned over an affidavit from their monitor to the Secretary of State for an investigation.

The Fulton County Board of Elections and Raffensberger’s office have not responded to a request for comment about Voyles’ claims.

It came as Raffensberger on Nov. 15 issued a fiery statement to Trump and GOP officials about alleged election fraud on Nov. 3, describing Rep. Doug Collins (R-Ga.), who is leading efforts in Georgia on behalf of Trump, as a “failed candidate” and a “liar.”

“For the first time in the history of Georgia, Absentee ballots submitted through our electronic portal required photo ID. My team—we made that happen,” said Raffensberger, who has come under fire from other Republicans who called on him to resign from his position and accused him of mismanaging the election. 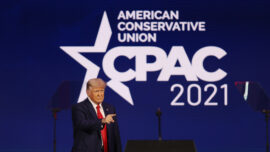 Trump Mulls White House Bid in CPAC Speech: ‘I May Even Decide to Beat Them for the Third Time’ 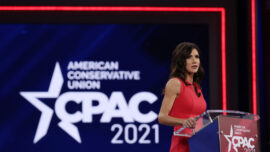 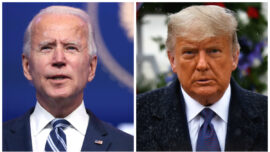 Trump Criticizes Biden for Having ‘Most Disastrous First Month’ in CPAC Speech
Sign Up for Our
Newsletter
Success!
You are now subscribed.
TOP NEWS MORE +