A 33-year-old Hong Kong man became the world’s first confirmed COVID-19 patient to be reinfected with a mutated strain of the CCP virus, according to researchers, who said the finding could carry significant implications for survivors of the respiratory disease.

The patient, an IT professional with no underlying health conditions, tested positive a second time for the virus on Aug. 15 during an entry screening at the Hong Kong airport following a trip to Spain and the UK.

When he first fell sick about 4 1/2 months ago, the man had a cough, sore throat, fever, and a headache, and was hospitalized on March 26, according to a report by Hong Kong University researchers.

He eventually recovered on April 14. It’s unclear when or how he became reinfected, but he has remained asymptomatic throughout the second infection.

After genetic analysis, the researchers found at least 24 differences between the genomes of two strains of the SARS-CoV-2 virus (scientific name for the novel coronavirus), suggesting that patients who recover from COVID-19 remain vulnerable.

The second strain is most closely associated with samples collected in Switzerland and the UK from July to August, according to the researchers’ study, which has been accepted for publication in the medical journal Clinical Infectious Diseases.

While cases of patients relapsing have been cited in China and other countries previously, the Hong Kong case is the first reinfection proven with genetic sequencing. The findings, the researchers said, serve as a reminder that immunity after recovery and virus vaccination cannot permanently shield one from the virus’s harm. The virus is likely here to stay, similar to the common cold, and recovered patients should still observe health guidelines, such as wearing a mask, following social distancing rules, and considering vaccination options, they said.

The individual was discharged from a Hong Kong hospital on Aug. 21, according to local media reports.

“This patient is lucky enough that he didn’t have any symptoms during the second infection, but we can’t assume that everyone’s second infection would be mild,” Kelvin Kai-wang To, clinical associate professor at the university’s microbiology department and study co-author, told reporters on Aug. 24.

“There could be a second infection, and even a third, a fourth may not be surprising, which makes it more difficult to contain the outbreak.”

Viruses frequently undergo genetic mutation as they replicate and adapt to the host environment, which can make the pathogen either more or less dangerous.

The mutation, called D614G, which has proliferated in Europe and the United States, results in 4 or 5 more spikes on the SARS-CoV-2 virus crown that significantly boosted its infectivity, according to a recent study by Scripps Research, a nonprofit medical research institute.

After viruses attack the body, one’s immune system produces antibodies to neutralize the pathogen, while also offering some protection against future infections. But such immunity fades over time, especially for those with lighter symptoms, according to a July study from the University of California–Los Angeles.

“Vaccinations work by simulating infection to the body, thereby allowing the body to develop antibodies. If antibodies don’t provide lasting protection, we will need to revert to a strategy of viral near-elimination in order to return to a more normal life,” he said. 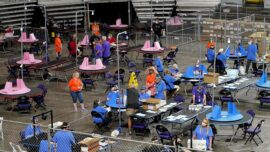