Wednesday marks the third day of Supreme Court nominee Amy Coney Barrett’s confirmation hearing, in which questioning from senators from the Senate Judiciary Committee will continue.

During the hearing on Tuesday, which ended a little after 8 p.m., Barrett fielded questions from senators from both sides of the aisle from a range of topics including politically-charged issues, legal doctrines, judicial processes, as well as questions about her record.

Senate Democrats focused much of their questioning on the Affordable Care Act (ACA), also known as Obamacare, as well as other social issues such as access to abortion, LGBT, gun regulation, and the 2020 presidential election. Many of the senators attempted to get Barrett to reveal how she would rule on certain issues or commit to recusing from cases related to Obamacare or the upcoming election.

Sen. Dick Durbin (D-Ill.) asked Barrett about her views on race in the country and George Floyd, which prompted the judge to share her story about how the incident had impacted her family. Barrett and her husband, Jesse Barrett, have seven children, two of whom are adopted from Haiti.

“As you might imagine, given that I have two black children, that was very, very personal for my family,” Barrett said, recounting how her husband was with their sons on a camping trip in another state when the video showing Floyd being arrested by police officers in a chokehold in Minnesota emerged.

“I was there and my 17-year-old daughter, Vivian, who’s adopted from Haiti, all of this was erupting. It was very difficult for her. We wept together in my room. It was also difficult for my daughter, Julia, who’s 10. I had to explain this to them,” she added.

Sen. Cory Booker (D-N.J.) pressed Barrett about whether presidents should commit to a peaceful transfer of power whether they win or lose the November election. President Donald Trump has been repeatedly questioning the reliability of the election infrastructure, including raising concerns about voter fraud due to the push for universal mail-in ballots.

Barrett said as a judge she wanted to “stay out” of such a “political controversy.”

Meanwhile, Senate Republicans predominately focused their questions on Barrett’s judicial philosophy, legal doctrines, as well as defending the judge of their colleagues’ claims.

At one point in the hearing, Sen. Mike Lee (R-Utah) shared his opinion on expanding the number of justices on the Supreme Court, also known as court-packing. Several Democrats from both chambers have threatened to expand the Supreme Court if Senate Republicans move forward with filling a vacancy left by liberal Associate Justice Ruth Bader Ginsburg, who died in September..

The effort to expand the court size would be aimed at reshaping the bench in favor of liberals or at the very least balance the ideological makeup of the bench if Democrats were to regain control of the Senate and White House in the next election.

“Court-packing is itself manipulative, it’s something that has great danger to do immense political and constitutional harm towards this mode of government in part because it would set up a one-way ratchet,” Lee said.

Sen. Ben Sasse (R-Neb.) reprised a version of his “civics lesson” from the first day of the confirmation hearing by asking Barrett why judges wear black robes.

“John Marshall, at his investiture, decided to wear a simple black robe. Pretty soon, the other justices followed suit and now, all judges do it,” Barrett responded. “I think the black robe shows that justice is blind. We all address the law the same, and I think it shows that once we put it on, we are standing united symbolically, speaking in the name of the law. Not speaking for ourselves as individuals.”

Barrett, throughout the hearing, repeatedly refused to pre-commit on how she would rule on cases or what she thought of Supreme Court precedents.

Citing Ginsburg, Barrett said she would adhere to the late justice’s standard by offering “no hints, no previews, no forecasts” on pending cases or express a view on Supreme Court precedents as it would “be wrong” and violate the canons on judicial conduct.

“I’m not going to express a view on whether I agree or disagree with Justice Scalia for the same reasons that I’ve been giving,” Barrett told senators on the Judiciary Committee on Oct. 13.

“Justice Ginsburg, with her characteristic pithiness, used this to describe how a nominee should comport herself at a hearing. ‘No hints, no previews, no forecasts.’ That had been the practice of nominees before her, but everybody calls it the Ginsburg Rule because she stated it so concisely and it has been the practice of every nominee since.”

She told senators that after her nomination she and her family went on a “media blackout,” while adding that she was aware of the caricatures made about her and her family in the media following her decision to accept the nomination.

Trump praised Barrett’s performance during the hearing, telling reporters that he thinks “Amy is doing incredibly well. It’s been a great day.” 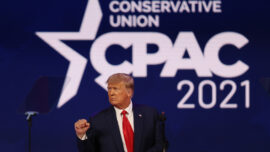