Sen. Lisa Murkowski (R-Alaska) said on Saturday that she intends to vote to confirm Judge Amy Coney Barrett to the Supreme Court despite her objections to the process of taking up the nomination weeks before the election.

Murkowski previously indicated that she wouldn’t support filling a Supreme Court vacancy before the election due to its proximity to Nov. 3 and a precedent that Republicans established in 2016 when considering President Barrack Obama’s Supreme Court nominee Merrick Garland.

She said during a speech on the Senate floor during a rare Saturday session that while she still opposes the process, she does not hold it against Barrett, who she said “navigated the gauntlet with grace, skill, and humility,” during her confirmation hearings in the Senate Judiciary Committee.

“Frankly, I’ve lost that procedural fight,” she said, adding that she would judge the nominee based on her merits, qualification, and judicial philosophy.

“I believe that the only way to put us back on the path of appropriate consideration of judicial nominees is to evaluate Judge Barrett as we would want to be judged, on the merits of her qualifications. And we do that when that final question comes before us. And when it does, I will be a yes,” she said.

During her speech, the Alaskan senator praised Barrett’s intellect, adding that the judge is the “sort of person that we want on the Supreme Court.”

Murkowski’s move means that Sen. Susan Collins (R-Maine) is now the only Republican senator who intends to vote against the nominee.

Senate Majority Leader Mitch McConnell (R-Ky.) told reporters that he has the votes to confirm the judge and will “stay on it until we [are] finished.” Republicans hold the majority of 53-47 in the Senate, and with Murkowski’s vote, Republicans appear to have 52 “yes” votes.

The Republican-controlled Senate reconvened on Saturday to debate Barrett’s nomination to the Supreme Court, as Democrats continued to oppose the process. The move to convene a meeting over the weekend makes way for a final confirmation vote to take place on Monday.

Democrats called up a series of bills such as the Violence Against Women Act and a pandemic spending measure during the session in an attempt to delay the debate.

“Rather than fighting big money or tackling corruption, rather than addressing any of the myriad of problems in our democracy that this country faces, Leader McConnell is undoing democracy by rushing through a lifetime appointment to the Supreme Court mere days before an election,” Minority Leader Chuck Schumer (D-N.Y.) said.

Republicans’ push to confirm Barrett to the nation’s highest court comes weeks before the Nov. 3 presidential election, drawing criticism from their Democratic colleagues who say that the winner of the election should select the nominee to replace the late Justice Ruth Bader Ginsburg.

Democrats have also taken issue over holding the proceedings during the pandemic as well as the tight schedule set by Republicans.

“Judge Barrett’s confirmation process has followed every rule. It’s followed the Constitution in every respect. We have abided by the norms and traditions dictated by our history. And Mr. President we’re going to vote tomorrow,” Majority Leader Mitch McConnell (R-Ky.) said on the Senate floor.

Murkowski, the only Republican senator to oppose then-Judge Brett Kavanaugh in 2018, also expressed frustration over her Republican colleague’s decision to move forward with the nomination.

“I’m not confused about how we wound up here but I certainly am frustrated by it. And it’s with a heavy heart, I just regret that we are in this place,” she said. 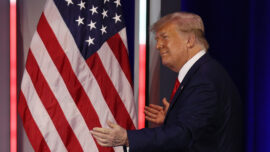