Prince Alwaleed bin Talal was held at the hotel along with 200 other princes and high-level officials since early November. The group was arrested as part of a large-scale anti-corruption crackdown authorized by the Saudi king and carried out by Crown Prince Mohammed bin Salman.

The number of officials and princes at the Ritz dwindled over the course of two months as the detainees gave in to demands from bin Salman for either restitution payments or other forms of capitulation. Unlike the others, Alwaleed is reported to have held out and refused to pay the government $6 billion.

During his interrogation, Alwaleed may have been hung upside down and beaten, the Daily Mail reported.

Bin Salman came to power after King Salman made the unusual move of changing the order of succession. Since then, bin Salman has spearheaded rapid and sweeping reforms in Saudi Arabia by strengthening ties with the United States and Israel, and building up military defenses against Iran.

In the fall of 2017, bin Salman purged the country of anti-Semitic and anti-American clerics. Alwaleed was arrested along with 200 other princes and clerics shortly after.

Alwaleed’s father, Talal, was a communist tied to at least one coup attempt against the Saudi king.

During a 2008 interview on the NY1, pro-communist former Manhattan Borough President, Percy Sutton, said he had been introduced to young Barack Obama when the future U.S. president was applying to Harvard Law School in the late 1980s.

Sutton said he was introduced to Obama “by a friend who was raising money for him,” and he identified this friend as Dr. Khalid al-Mansour, whom he described as “a principal adviser to one of the world’s richest men.” Al-Mansour asked Sutton to write a letter to his friends at Harvard to support Obama’s entry, he said.

The individual Sutton described as “one of the world’s richest men” was Alwaleed, and his principal adviser, al-Mansour, was helping to finance the education of select individuals who they believed could become assets in the future.

According to Trevor Loudon, author of “The Enemies Within,” Alwaleed’s choice of principal adviser was significant. Al-Mansour, formerly known as Donald Warden, was a mentor of Huey Newton, the founder of the Black Panther Party, which advocated for Maoist guerrilla warfare

Jarrett’s column detailed how al-Mansour was working on a program to secure $20 million a year, for 10 years, to finance minority students.

Alwaleed was also financing Islamic study programs with ties to the Muslim Brotherhood and terrorist organizations at universities around the world.

In December 2005, Alwaleed gave $20 million to Georgetown University’s Center for Muslim–Christian Understanding. The move was considered especially controversial because of the center’s director, John Esposito, whom FrontPage Magazine described in 2008 as being “known for his vigorous apologetics for Islamic extremism.”

Around the same time, Alwaleed gave another $20 million to fund a similar program at Harvard University. Suzanne Gershowitz of the American Enterprise Institute wrote in the National Review that the program tends “to amplify anti-American rhetoric, legitimize conspiracy theories, and, in the name of cultural relativism, gloss over the oppression that exists in the Arab world.” 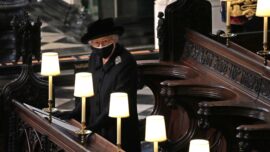 Queen Elizabeth Stands Alone as Prince Philip Is Laid to Rest
Sign Up for Our
Newsletter
Success!
You are now subscribed.
TOP NEWS MORE +