WASHINGTON—Merrick Garland, President Joe Biden’s selection for attorney general, moved a step closer to securing Senate confirmation as the top U.S. law enforcement official on Monday as the Judiciary Committee threw its weight behind his nomination.

The federal appellate judge won bipartisan support in a 15-7 tally in the Senate Judiciary Committee to advance his nomination to the Senate floor for a vote that Democrats hope will be held sometime this week. Among the four Republicans voting in favor of Garland were two former chairmen of the committee, Chuck Grassley and Lindsey Graham.

He drew the support of the committee’s Democrats while seven Republicans voted no.

On March 9, the Senate Judiciary Committee intends to hold a confirmation hearing for Lisa Monaco and Vanita Gupta, Biden’s choices to serve in the No. 2 and No. 3 top Justice Department jobs. 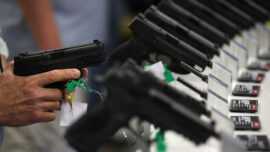