Senators Unveils Bill to Sanction Chinese Officials Who Violate Hong Kong Autonomy
Hong Kong ProtestsEva Fu May 21, 2020 ShareFacebookTwitterCopy Link
Protesters march during a demonstration against Article 23 and bans on freedom of association in Hong Kong on July 21, 2018. Police in Hong Kong sought to ban a political party which promotes independence for the city on July 17, citing it as a potential national security threat as Beijing ups pressure on challenges to its territorial sovereignty. (VIVEK PRAKASH/AFP via Getty Images)

Two U.S. senators are planning to introduce a bipartisan bill that would sanction Chinese officials for undercutting Hong Kong’s autonomy, hours after Beijing moved to impose a sweeping national security law on the territory.

Titled the Hong Kong Autonomy Act, the legislation aims to defend human rights in Hong Kong by penalizing officials complicit in the Chinese regime’s meddling in the territory. It also proposes sanctions on banks that conduct “significant transactions” with entities involved in such abuse.

On May 21 evening, the Chinese regime’s figurehead legislature, the National People’s Congress (NPC), announced that it would propose a national security law for “establishing a legal system and enforcement mechanism to defend national security” in the former British colony of Hong Kong.

The measure would bypass Hong Kong’s legislature, and likely pass unhindered—as the NPC is a ceremonial rubber-stamp that approves directives promulgated by the Chinese Communist Party.

“The communist regime in Beijing would like nothing more than to extinguish the autonomy of Hong Kong and the rights of its people,” Toomey said in a press release on Thursday.

“In many ways, Hong Kong is the canary in the coal mine for Asia. Beijing’s growing interference could have a chilling effect on other nations struggling for freedom in China’s shadow,” he continued.

The bill will target individuals who enforce China’s new national security law and Hong Kong police officers who crack down on Hong Kong protesters. Since last June, Hongkongers have staged mass demonstrations against Beijing’s encroachment on local affairs—ignited by a since-scrapped extradition bill that would have allowed China to transfer people in Hong Kong for trial in courts controlled by the Chinese Communist Party.

Van Hollen commended the courage of Hong Kong protesters who persisted “[d]espite China’s brutal crackdown.” He said there’s “no time to waste” for the United States to take up the issue as the Chinese regime continues to “strip Hong Kong of its autonomy.”

President Donald Trump warned of a strong reaction if Beijing chooses to move ahead with imposing the national security law.

“If it happens, we’ll address that issue very strongly,” he told reporters at the White House on Thursday, without elaborating.

Meanwhile, State Department spokesperson Morgan Ortagus on Thursday urged Beijing to “honor its commitments and obligations in the Sino-British Joint Declaration,” which guarantees Hong Kong a high degree of political freedom upon its transfer to Beijing’s rule in 1997.

“Any effort to impose national security legislation that does not reflect the will of the people of Hong Kong would be highly destabilizing, and would be met with strong condemnation from the United States and the international community,” she told The Epoch Times in an email.

The State Department has said it delayed issuing an annual report on Hong Kong’s autonomy, to account for any further actions from Beijing.

The Hong Kong Human Rights and Democracy Act, signed into law last year, mandates that the State Department determine whether the territory has retained sufficient political autonomy to preserve its special trading privileges with the United States.

Dan Garrett, a Hong Kong expert who authored the book, “Counter-hegemonic Resistance in China’s Hong Kong: Visualizing Protest in the City,” said he foresees “dire” consequences for dissident Hongkongers and critics of the regime once the Chinese law is put in place.

“The move constitutes the end of the Hong Kong System and the formal introduction of the Communist System in the city”—and is “only the first step” to bring the city under its dominion, he said in an email interview.

At a minimum, he said, the Chinese regime will “close Party-perceived ‘loopholes’” in Hong Kong’s legal system in order to quell protests and punish those who offend its authority.

“We can expect to see individuals transferred to Communist-custody and banned from entry to Hong Kong,” he said. Peaceful protests and intensifying resistance over Beijing’s measures will only become “pretext for more political violence and repression of Hong Kong,” he noted.

“[T]he CCP (Chinese Communist Party) … has lit the fuse on an even larger powder keg than it did last year,” he said, noting that a list of upcoming anniversaries, such as the upcoming commemoration of the Tiananmen Square Massacre, would likely renew protests in Hong Kong.

Cathy He contributed to the report. 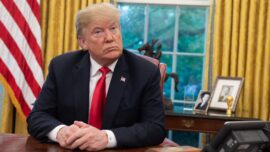