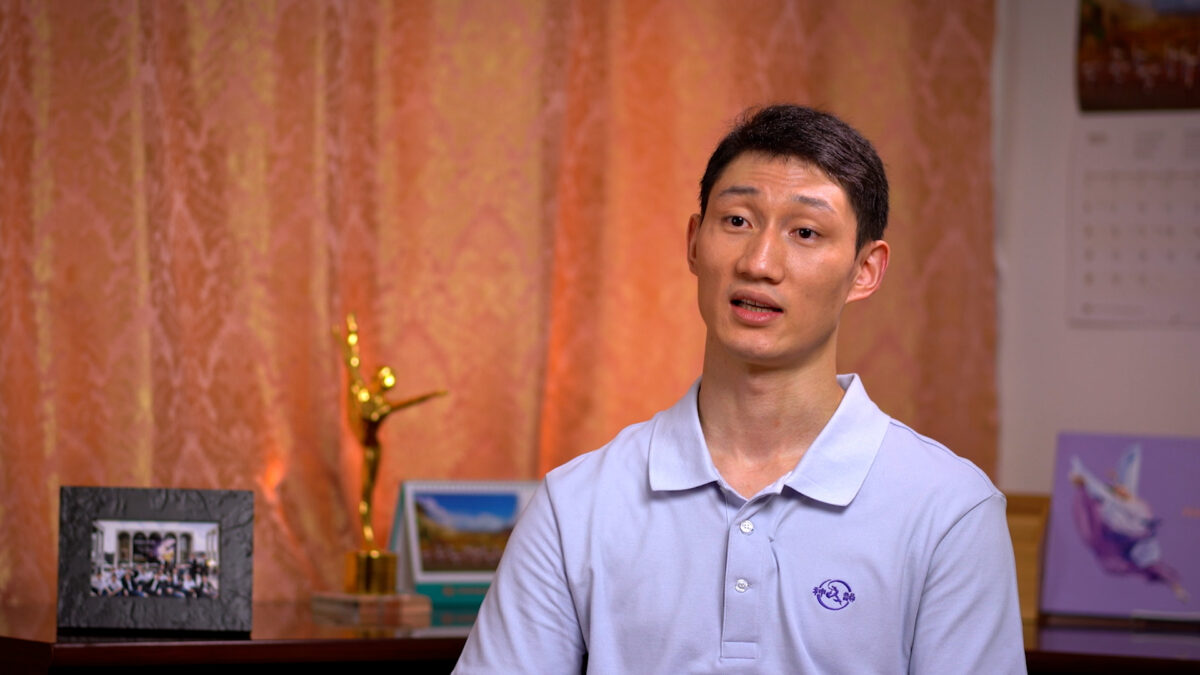 Principal dancer for Shen Yun Steven Wang speaks about the ordeals his family suffered in China for their spiritual beliefs. (Courtesy of Shen Yun Performing Arts)

The curtain opens, and principal dancer Steven Wang leaps out, unfurling a banner in his hands. On it, five characters are written. They read: Falun Dafa is good.

For daring to utter these few simple words, tens of millions in China, including Wang’s family, face severe persecution by China’s communist regime.

Wang, a classical Chinese dancer, began his career nearly two decades ago when he was accepted into a professional dance academy at age 12. Today, he’s a principal dancer with Shen Yun Performing Arts, the world’s premier classical Chinese dance company, unique for its mission of reviving the authentic traditional Chinese culture.

For 5,000 years, China was a place where harmony between heaven, earth, and humankind was the central belief of society. The people believed their culture to be divinely inspired, and Confucianism, Buddhism, and Taoism had a strong influence on this society, which sought to uphold principles such as loyalty, integrity, kindness, wisdom, and justice.

It’s a mission Wang is personally invested in.

“My father was persecuted to death,” Wang said, in a video on the Shen Yun Creations website. Many artists in the New York-based performing arts company have been profiled on this new video site, telling stories about the faith and freedom they sought when they joined Shen Yun. As an American company, Shen Yun allows its artists to freely express their beliefs and culture, and share these with the world.

But many note a tragic irony: An arts company intent on saving the divinely inspired legacy of China’s 5,000 years of civilization cannot even set foot in modern China still ruled by the Chinese Communist Party.

Wang himself couldn’t go back to China when he learned of his father’s death because of the Party’s persecution, so he couldn’t attend the funeral.

“I had no way of going back to see him one last time,” Wang said. As of today, his mother remains in China and still faces persecution.

The dancers in Shen Yun all meditate, and many Shen Yun performers practice Falun Dafa, a spiritual practice that teaches the three principles of “truthfulness, compassion, and forbearance.” This tradition of spiritual cultivation had been a large part of traditional Chinese culture until communism came to power in the last century, intent on wiping out tradition.

“Falun Dafa’s principles teach people to first change themselves, and ‘look within.’ Whenever you run into problems, don’t consider everything from your own perspective—think from the perspective of others,” Wang said. “As a result, our family life became much more harmonious.”

His parents were no longer so short-tempered. They disciplined him with reason. He and his parents began to communicate more and had a good relationship.

It would be short-lived: In 1999, the Chinese Communist Party, intent on eradicating Falun Dafa, set its sights on the 70 million to 100 million adherents of the spiritual practice.

“There were mass arrests and persecution,” Wang said. His family suffered, too. “Communist policemen broke into our home, threw a frenzy of punches and kicks. Then they abducted my parents and made a huge mess in our home, and took away all our books of Falun Dafa teachings.”

His parents were both detained, in separate prisons.

“Every time we went to visit them, they looked like they’d been starved. They never told me what it was like in there. They only told me they were doing fine. But you can probably imagine—you could tell from their withered faces that they’d been tortured,” he said.

From that point, Wang never again experienced a stable family life. If his father was released, his mother would get arrested.

“This persecution never ceased,” he said. He remembers spending New Year’s with his three older sisters and no parents at home.

Eventually, Wang came to the United States to continue his dance career. While Wang was overseas, his father was tortured in prison and then released because the guards thought he might die while detained. In 2009, his father died from health complications, and Wang only learned of it a month later.

“Cultivation is not a crime,” Wang said. “I could not go back to China, so all I could do was continue using art to expose this persecution.”

Wang, like other members of Shen Yun, is unable to go to China. As individuals, they could face persecution, and as a group, the Chinese Communist Party won’t allow the company to enter China, for fear of its influence in spreading traditional culture.

Two years after his father’s death, Wang performed the role of a Falun Dafa practitioner, holding up a banner in Tiananmen Square, during one of Shen Yun’s pieces.

“Our dance was based on true events, adapted for stage,” he said. “When the persecution began, there were many practitioners who went to Tiananmen Square to hold up banners in protest.

“When I was portraying the practitioner being persecuted, I would draw upon my past experiences. These were things that really happened to people close to me.

“I hope to use the form of art to raise awareness of the persecution going on in China [and] to kindle justice in more people’s hearts to oppose this persecution.

“Then, one day, this persecution will finally come to an end.”