Teen Says He ‘Felt God Grab’ Him During 120-Foot Fall

A Missouri teenager who slipped down a 120-foot drop while hiking says he felt God save him.

Ben Foster was out hiking a trail in Cuivre River State Park on June 9 with friends when he slipped off a rock while climbing down a bluff, KMOV reported.

“I felt God grab on to me and pull on me tight,” Foster told KMOV.

The 17-year-old’s tumbling descent was stopped after 50 feet by a branch.

“I just flung my left arm out and grabbed onto it somehow, and just held on,” said Foster.

Paramedics and fire crews had a big task in locating Foster. Firefighters had to set up a structure of ropes to allow them to navigate the bluff safely.

He was transported off the bluff and into a rescue boat. He eventually reached a hospital.

“Nobody expected him to survive that fall.” #GoodNews https://t.co/RmExvdxDIR

Foster’s mother was extremely worried about his condition.

“My heart stopped, I didn’t know what to think and plus being a nurse, I froze, I didn’t know if he’s alive. How bad is he injured?” said Foster’s mother, Maria Branon, via KMOV.

Foster managed to evade serious harm. He came away with only a broken clavicle and minor skin abrasions.

Branon was shocked that her son was even still walking after an accident that could have been much worse.

“Nobody expected him to survive that fall,” Branon told Fox News. “They expected something to be wrong with his head, his neck…they did multiple CAT-scans…and the emergency room doctor said it’s a miracle. I can’t believe he’s walking. I can’t believe he survived the fall.”

Foster reiterated why he feels he survived the fall.

“God grabbed onto me and brought me to safety,” Foster told KMOV, via video.

A man was injured, but survived a fall down Grandad Bluff in La Crosse, Wisconsin, WKBT reported.

Authorities were alerted to the man the evening of June 10. The man is believed to have fallen between 20 and 80 feet.

In February, the Associated Press reported that a man fell 150 feet down a bluff near the Mississippi River.

The man managed to call 911, and police located him through cell phone pings. Assistant Fire Chief Kathleen Mullen thinks the man was there for at least three hours after he fell.

Rescuers were lowered to the man and placed him on a board to lift him to safety. Mullen said the man’s legs had major injuries and he had suffered other injuries due to the cold.

Another man survived a 70-foot drop into a volcano in Hawaii, The Independent reported last month.

The man is in his 30s. He was visiting Kilauea, one of the most active volcanos in the United States, when he tried to get a closer look.

He was at the Steaming Bluff of the volcano’s Halemaumau crater when he decided to climb over the protective railing to get a look. That’s when he fell.

Rescuers found the man 70 feet down into the volcano, although the total depth went 300 feet down from the cliff edge, the National Park Service reported.

He was found seriously injured, but alive. He was airlifted to a local hospital.

Although Kilauea was not erupting at the time of the man’s fall, it erupted for three straight months in 2018, The Independent reported. It caused the destruction of Hawaii’s largest freshwater lake, along with 700 homes.

In 2017, a woman was found dead near the very same overlook, according to The Independent.

US
American Cruise Passengers Quarantined at US Military Bases 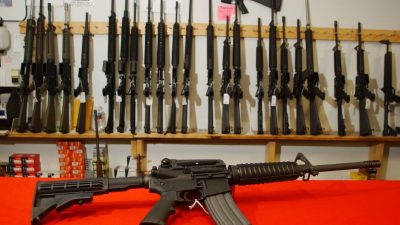