The governors of Arizona and Texas said that other states need to deploy available police or law enforcement to the U.S.-Mexico border to assist Border Patrol agents as they deal with a surge in encounters.

Due to the surge of illegal migration, Govs. Greg Abbott and Doug Ducey wrote in a letter Thursday to other governors that “additional manpower is needed from any state that can spare it.”

“With your help, we can apprehend more of these perpetrators of state and federal crimes, before they can cause problems in your state,” the two wrote. They did not make mention of states sending their respective National Guard forces to the border as troops sent to the border cannot legally make arrests.

Data released this week from Customs and Border Protection show agents apprehended some 180,000 individuals who illegally entered the United States in May, which is the highest figure recorded in about two years. More than 112,000 of those illegal immigrants were expelled under the Title 42 health provision, which was authorized via an emergency declaration last year due to the COVID-19 pandemic.

“Many of these [illegal immigrants] crossing involve state-law crimes, such as criminal trespassing or smuggling of persons,” Ducey and Abbott said. “Most of them entail federal-law crimes, too, including illegal entry and illegal reentry.”

The two governors argued that a 1996 opinion from the Department of Justice noted that “state and local police may constitutionally detain or arrest aliens for violating the criminal provisions of the Immigration and Nationality Act” grants states the ability to police the border. Immigration law is generally enforced by the federal government via Customs and Border Protection (CBP) and Immigration and Customs Enforcement (ICE).

Furthermore, they said that law enforcement who are sent to the border would be expected to assist in stopping drug smugglers and cartels from transporting narcotics into the United States. Cartels, they added, also are heavily involved in human trafficking.

“The convicted criminals they smuggle into the homeland,” the governors added, “will bring recidivism with them to far too many of your communities.”

At the same time, Abbott and Ducey took aim at President Joe Biden’s administration and accused him of fostering policies that encourage illegal immigrants to come to the border, saying they were forced to declare a disaster and an emergency in their respective states.

Abbott, meanwhile, announced Thursday that Texas will conduct a “comprehensive border security plan to crack down on illegal border crossings” in the state, which would potentially include the construction of a state-funded border wall.

The Epoch Times has contacted the Department of Homeland Security for comment. 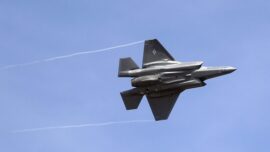