The International Olympics Committee declared the Tokyo Olympics officially closed, with officials claiming the Games were a success despite the pandemic.

The Olympics and its closing ceremony with the theme “Worlds We Share” were held in the middle of a resurgent COVID-19 pandemic and have been rejected by many Japanese citizens.

At these Games, spectators were kept at bay. A patchwork of rules kept athletes masked and apart for many of the medal ceremonies, yet saw them compete closely enough they would be swapping bodily fluids in some venues. Risks that could be mitigated were, but at the same time events had to go on.

Meanwhile, U.S. television ratings for the Games saw a considerable decline over the 2016 contests.

NBC’s primetime coverage on July 26 averaged 14.7 million viewers, which is a nearly 50 percent drop compared to the same night during the 2016 Rio de Janeiro Olympics—and it’s 53 percent less than the 2012 Olympics in London. The overall TV audience for the Tokyo Games, according to Nielsen ratings, was down about 45 percent from the Rio Games.

Some have speculated that the pandemic, as well as certain Team USA athletes’ embracing of “woke” viewpoints, with some not standing for the national anthem, alienated certain viewers, which contributed to the decline in ratings.

“When you look at the numbers, it’s hard to be pleased with them,” Andy Billings, director of the sports communications program at the University of Alabama, told The Associated Press. “It’s probably NBC’s worst-case scenario, but it’s probably a worst-case scenario that they would have been able to predict months ago.”

Team USA, which faltered during the early portion of the Games, finished with the most gold medals during the Olympics, beating out China, which came in second place.

Team USA’s 39 gold medals are the 11th-most golds it has won during an Olympics, although it surpassed the totals it amassed during five of the previous eight Summer Games contents. At the same time, Team USA took home 113 medals overall, with 41 silver and 33 bronze.

China came in second to Team USA with 38 gold medals.

Women’s medals made up nearly 60 percent of Team USA’s total. Team USA’s men won about 41 medals in the Olympic events—the fewest in U.S. history of the modern Games, which started in 1896.

“What an awesome testament to the hard work of these incredible athletes and to those strong women who paved the way before them,” said Sarah Hirshland, chief executive of the U.S. Olympic & Paralympic Committee, according to The Wall Street Journal. “We are so proud.”

Woman Raped on Train as Bystanders Did Nothing, Police Say 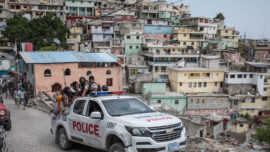