We look at the biggest trade showdown in Asia. Both China and Taiwan want to join the Comprehensive and Progressive Agreement for Trans-Pacific Partnership (CPTPP). China applied to join the partnership to be alongside free-market economies like Japan and Canada. But Taiwan applied days later to compete with China. I ask economist and author Clyde Prestowitz about the likelihood and the political implications behind the moves by Taiwan and China.

Also, I discuss the increasing awareness of China’s role as an aggressor in the economic and political front, if the United States is recognizing the facets of the threat by the Chinese Communist Party, and how to better work with Taiwan.

Plus, we take a detailed look at the concept of “rules-based order,” repeated constantly by the Biden administration. What is it, and how practical is it against China’s idea of competition?

‘Defeat the Mandates’: Thousands Protest in Washington Against Vaccine Requirements 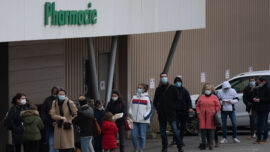