President Donald Trump said the pandemic highlights the vulnerabilities of supply chains whose parts are located in different parts of the world, adding his administration was pursuing policies to bring key links back to the United States.

“We have a supply chain where they’re made in all different parts of the world,” Trump said in an interview with Fox Business’ Maria Bartiromo that aired Thursday.

“And one little piece of the world goes bad and the whole thing is messed up,” Trump said, referring to the outbreak in Wuhan, China, of COVID-19, the disease caused by the Chinese Communist Party (CCP) virus, commonly known as the novel coronavirus.

“We should have them all in the United States,” Trump said of key supply chains.

Trump brought up the F-35 jet fighter during an exchange where Bartiromo asked how the president planned to incentivize key U.S. industries to re-shore.

“It’s a great jet, and we make parts for this jet all over the world,” Trump said. “The problem is if we have a problem with a country, you can’t make the jet. We get parts from all over the place. It’s so crazy.”

“We should make everything in the United States,” the president added.

Asked if this was a realistic objective, Trump said he believed it was, adding, “We’re doing it because I’m changing all those policies.”

It was unclear if Trump was referring specifically to the F-35 when he mentioned policy adjustments, or whether he was speaking more broadly about initiatives to incentivize key U.S. manufacturing companies to bring parts of their supply chains back to America.

Lockheed Martin did not immediately respond to requests for comment from The Epoch Times about whether they had been given any direction from the White House regarding the F-35.

In the interview, Trump said one possible measure to get companies to re-shore is through trade barriers.

“You know, if we wanted to put up our own border, like other countries do to us, Apple would build 100 percent of their product in the United States. That’s the way it would work,” Trump said.

Asked whether he would consider giving companies tax breaks to return manufacturing operations to the United States, Trump suggested it was their duty to re-shore operations and that one way to encourage them to do so would be through tax.

“One incentive, frankly, is to charge tax for them when they make product outside,” Trump said.

Trump’s comments came before he travels to Allentown, Pa., Thursday to highlight a U.S. medical equipment distributor that is contributing to the effort to manufacture and ship personal protective gear across the country to help with the response to COVID-19.

Trump will tour Owens and Minor Inc., which the White House says has sent millions of N95 masks, surgical gowns, and gloves to hospitals across the country.

Trump in his remarks is expected to discuss efforts to use the Strategic National Stockpile for coronavirus testing, as well as efforts to “replenish and bolster the stockpile so that America is never caught off guard again,” the White House said. 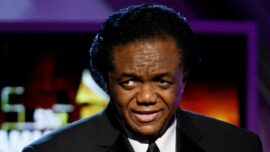