The average effective tax rate, or the proportion of income paid after tax breaks, among profitable major firms dropped from 15.7 percent in 2014 to 8.9 percent in 2018, according to a new study (pdf) by the Government Accountability Office (GAO). Despite lower rates, tax contributions from large profitable companies increased from 2016 to 2018, due to more foreign-sourced income returning to the United States.

Former President Donald Trump reduced the statutory corporate tax rate from 35 percent to 21 percent during his time in office, but the actual rate paid by large businesses is often substantially lower than the legal rate. The study focused on the Tax Cuts and Jobs Act (TCJA), saying it “contributed to a lower effective tax rate in 2018, but also generated tax liability from income that was previously not taxable under U.S. law.”

Garret Watson, senior policy analyst at the right-leaning Tax Foundation, told the Epoch Times that the trend of increased tax revenue continued throughout the Trump presidency. “Tax liabilities have been on an upward trend as the economy improved from 2017 to 2020, and overall corporate tax collections exceeded the pre-TCJA revenue baseline by 2021,” Watson said.

Sen. Bernie Sander (D-Vt.), who commissioned the GAO to conduct the study, released a statement on Friday calling for a repeal of Trump’s tax reforms. Sanders criticized corporations for not paying their “fair share.” 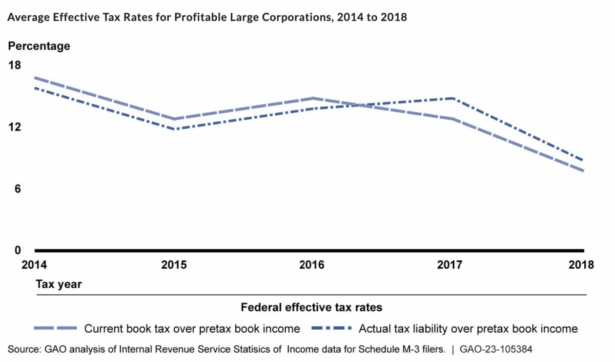 “The situation has become so absurd that over a third of the largest and most profitable corporations in our country pay nothing in federal income taxes,” the senator said. “Instead of cutting vital and popular programs like Social Security and Medicare, we need to repeal the Trump tax breaks for the rich.”

The share of profitable large corporations owing no federal income tax did expand substantially, jumping from 22 percent to 34 percent from 2014 to 2018.

The study classified a corporation as “large” if it owned $10 million or more in assets. And some these companies use losses or credits from previous years to reduce tax liabilities.

Others have joined the senator’s calls for higher corporate taxes.

In response to the GAO study, Steve Wamhoff, federal policy director at the left-leaning Institute on Taxation and Economic Policy, advocated for an international minimum tax on corporations to prevent “offshore tax dodging.” Wamhoff praised the Biden administration’s domestic corporate minimum tax—recently passed as part of the “Inflation Reduction Act”—saying it will partially solve the problem.

Watson disagrees, accusing the Biden law of being “rife with expectations” that “reduce effective tax rates for preferred activity, such as the R&D tax credit and green energy credits.” Watson also criticized an international minimum tax as being unnecessary given corporations, on average, are not currently paying lower rates abroad.

“The global agreement is even further afield from this discussion, as worldwide average tax rates aren’t lower than the overall federal rates,” he said. Worldwide tax rates paid by large corporations were roughly 3 percent higher than federal rates in 2018, according to GAO.

Wamhoff did not respond to a request for comment.

While the share of large corporations paying no federal income taxes increased, this was not the case for all corporations. These findings are indicative of a bifurcation in tax burden between small and large companies, Watson said. 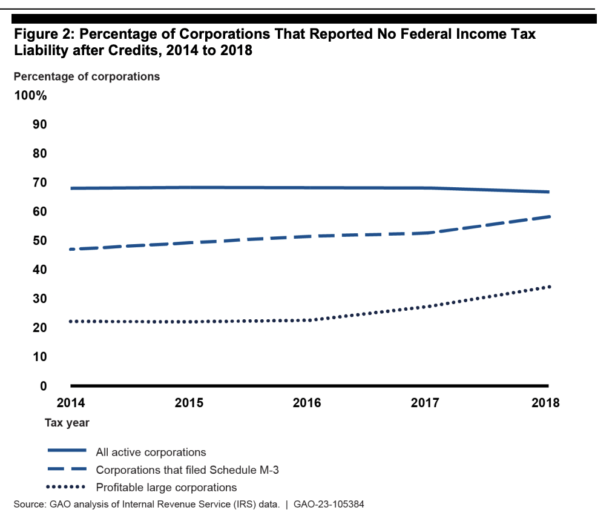 Biden has taken aim at large profitable corporations—the category that saw the most dramatic rise in the percentage of companies paying no federal income taxes—touting his new 15 percent corporate minimum tax on Twitter. “The days of the wealthiest companies not paying taxes are over,” the president wrote on Jan. 2.

Critics argue that the Biden administration’s minimum tax will fail to address the issue since lawmakers included various exemptions such as foreign tax credits, net operating loss deductions, and defined benefit pensions. Because of these legal loopholes, many firms pay no income tax, and the revisions will certainly make the tax law more confusing, according to tax experts.

It’s 2023. That means the largest, most profitable corporations will have to start paying a 15% minimum tax.

The days of the wealthiest companies not paying taxes are over.

In addition, certain provisions of the TCJA expired recently, which will broaden the tax base while reducing the incentive for corporations to invest.

The TCJA allowed for 100 percent bonus depreciation, permitting companies to immediately deduct the full cost of business investments such as equipment and machinery. According to tax experts, this is one of the most important elements in the tax legislation that encouraged corporations to invest. The provision is being phased out this year and will be completely phased out by the end of 2026.

Other changes to the tax code affecting companies this year include a switch to five-year amortization of research and development (R&D) expenses rather than an immediate write-off and a stricter interest deduction limitation. These changes are expected to discourage business investments.