CHICAGO—A 14-year-old boy was fatally shot on Chicago’s South Side just hours after another boy the same age was shot and killed on the city’s near West Side, police said Thursday.

No arrests had been made in the shootings Wednesday, police said.

The first shooting happened just before 4 p.m. Police said a boy, identified by the Cook County Medical Examiner’s office as Javion Ivy, was standing on the sidewalk when he was shot twice in the chest. Chief of Detectives Brendan Deenihan told reporters Thursday morning that witnesses told police they saw two people fleeing the scene. The boy was taken to a hospital, where he was pronounced dead soon after.

Deenihan said the second boy was shot at about 8:50 p.m. in Englewood on the South Side. He said the boy was walking with a friend when someone in a dark colored vehicle shot him in the head. The boy, identified by the medical examiner’s office as James Sweezer, was pronounced dead shortly before midnight.

Police said the second shooting happened in the same neighborhood where earlier that evening a 29-year-old woman sitting in her car was shot and killed by two males who climbed from their vehicle, walked over, and opened fire before driving off. No arrests have been made in that shooting and police did not say if they believe the two slayings were related.

“I think about those two young boys, and I think about their potential,” Brown said during a news conference. “They are two of Chicago’s children robbed of their futures, and it is unacceptable.” 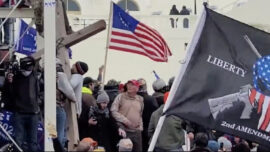