Rittenhouse: Biden Defamed Me, Lawyers Exploring Lawsuits
USZachary Stieber Nov 23, 2021 ShareFacebookTwitterCopy Link Comments
Kyle Rittenhouse looks on as the jury is let out of the room during a break during his trail at the Kenosha County Courthouse in Kenosha, Wis., on Nov. 15, 2021. (Sean Krajacic/The Kenosha News via AP)

President Joe Biden may face a lawsuit over his evidence-free claim that Kyle Rittenhouse is a white supremacist, the teenager indicated in an interview that aired on Monday night.

Biden made the claim while he was a presidential candidate in 2020. He provided no proof for the label.

“It’s actual malice, defaming my character for him to say something like that,” Rittenhouse told Fox News.

It was the first time the teen has responded to the claim.

The term actual malice refers to a legal standard set by the Supreme Court for libel cases where public figures can win damages, according to the Free Speech Center at Middle Tennessee State University.

Various lawyers have said Rittenhouse could sue Biden and others for defamation, and the teen suggested that may happen.

“I have really good lawyers who are taking care of that right now. So, I’m hoping, one day, there will be accountability for their actions that they did,” he said.

The White House has not responded to requests for comment on Biden’s claim.

Rittenhouse shot three men in Kenosha, Wisconsin, on Aug. 25, 2020. He was acquitted on all charges last week, successfully making the case that he carried out the shootings in self-defense. Video footage and testimony showed the men each attacked or were advancing towards him when they were shot.

Biden’s claim came in a Twitter post from his official account. He was criticizing then-President Donald Trump, alleging Trump “refused to disavow white supremacists” during a debate they took part in the night prior.

A video attached to the tweet showed people during the Unite the Right rally in Charlottesville, Virginia, as well as Rittenhouse in Kenosha.

“When I saw that I was shocked. I was angry,” Wendy Rittenhouse, Rittenhouse’s mother, told Fox earlier this month.

“He did that for the votes, and I was so angry for a while at him and what he did to my son—he defamed him,” she added.

Neither Biden nor officials speaking for him have ever addressed his description of the teenager.

Confronted with the comment during a press briefing last week, White House press secretary Jen Psaki said she would not address it. During the answer, she seemed to describe Rittenhouse as a vigilante.

“What I’m not going to speak to right now is anything about an ongoing trial nor the president’s past comments. What I can reiterate for you is the president’s view that we shouldn’t have, broadly speaking, vigilantes patrolling our communities with assault weapons. We shouldn’t have opportunists corrupting peaceful protests by rioting and burning down the communities they claim to represent anywhere in the country,” Psaki said.

Biden told reporters after Rittenhouse was acquitted that he did not watch the trial but “stood by what the jury has concluded.”

In a written statement released by the White House, Biden said he was “angry and concerned” by the verdict but called for calm because “the jury has spoken.”

Rittenhouse addressed Biden directly while speaking to Fox, urging him to get acquainted with what unfolded during the trial.

“Mr. President, if I could say one thing to you, I would urge you to go back and watch the trial and understand the facts before you make a statement,” he said. 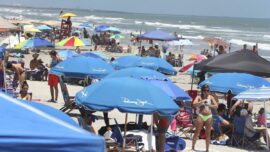