What China Invading Taiwan Would Mean to the US & World; Is BlackRock Selling Out America?
Wide AngleBrendon Fallon Nov 13, 2021 ShareFacebookTwitterCopy Link Comments

“What we’ve seen is a force-modernization commitment and effort over the past 25 years on the part of the Chinese, and as their country has gotten wealthier, they’ve had more resources to invest in a military,” says U.S.–Taiwan Business Council President Rupert Hammond-Chambers.

He believes that the Chinese Communist Party (CCP) is “one hundred percent serious about invasion” of Taiwan, and that the United States, and the world more broadly, has vested interest in seeing Taiwan being able to continue with “business as usual.”

Taiwan’s production of semiconductor chips—which feature in everything from smartphones to children’s soft toys—provides just one compelling example of this: “Those factories in Taiwan, if China invaded, [would] be turned off. So not only would they not get access to those chips, we wouldn’t either as well.”

Would U.S. (and other) forces arrive in time to stave off a sudden CCP invasion, and how would Taiwan stand on its own in the interim? 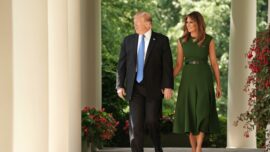