A police officer in Oklahoma responding to a report of a house fire discovered it to be his own home, authorities said.

Corporal Anthony Louie of the Seminole Police Department received a call early on Nov. 13 that dispatchers received reports of a house fire and asked him to investigate, according to the Seminole FOP Lodge 138, the Fraternal Order of Police in the region.

After Louie arrived at the location, he realized the house engulfed in flames was his own. The corporal rushed into the home and successfully rescued his entire family, sustaining serious burns.

“Upon entering the residence he had to run through the flame engulfed porch and in doing so sustained serious burns and smoke inhalation injuries,” the order wrote in a statement on Facebook.

Authorities have since confirmed his family was not injured in the blaze because of his “bravery and quick action.”

Many social media users and local residents were moved by the story and offered support to the injured officer and his family. The FOP said the response from citizens “has been amazing.”

“We have received many requests for a way to send assistance for the family for clothing and household items that were lost,” FOP officials wrote.

“The overwhelming support received for Officer Louie has been amazing and his family and fellow officers wish to thank each and every person for their thoughts and prayers,” they continued.

No information was provided in the FOP statement about what might have caused the fire.

Seminole County is located about 50 miles east of Oklahoma City and 75 miles from Tulsa. 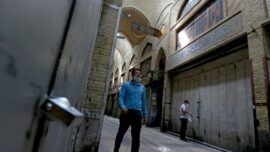