BERLIN—On Wednesday, Lufthansa’s board said it cannot accept the conditions set by the European Commission for a 9 billion euro ($9.9 billion) bailout.

The CCP virus pandemic has almost grounded the entire airline industry. Europe’s second-largest carrier Lufthansa, which has been losing a million euros every hour, according to Simple Flying, needs a lifeline to survive.

After two months of wrangling, the German government this week came up with a rescue plan for Germany’s flagship carrier. In exchange, the state would get a 20 percent stake in the company as well as two members on Lufthansa’s board.

Some are concerned about the political influence this may bring.

“In the past, Lufthansa was a very successful airline company,” said Stefan Kooths, head of forecasting at the Kiel Institute. “The fact that we now see a very strong influence on the company is bad news for the German economy.”

The EU Commission, which needs to sign off on the deal, is worried about competition in Europe. It doesn’t want Lufthansa to become too strong with the German government as a large shareholder.

In order to assuage those fears, Brussels wants Lufthansa to give up valuable landing slots to competitors as a condition. On Wednesday, Lufthansa’s supervisory board rejected this condition.

At 9 billion euros, the Lufthansa rescue package will be the largest airline rescue in Europe during this crisis. The French government gave Air France a 7 billion euro loan, while Italy renationalized Alitalia for 3 billion euros, according to Politico.

But what are the downsides of these bailouts for the industry?

“We need some restructuring in the airline industry,” Kooths said. “There are overcapacities there. And all the rescue programs that we currently see all over the continent tend to prolong this process.”

Chancellor Angela Merkel, who is eager to make the deal happen, said she is ready for a “tough fight” with the EU Commission, according to Reuters. 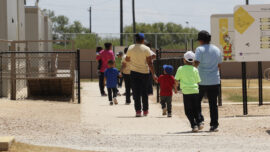 108 Illegal Immigrants Released by Border Patrol in Texas Tested Positive for COVID-19: Officials
Sign Up for Our
Newsletter
Success!
You are now subscribed.
TOP NEWS MORE +