Male Nurse Nathan Sutherland Arrested in Rape of Vegetative Woman
USZachary Stieber Jan 23, 2019 Share
Hacienda HealthCare in Phoenix, Ariz., on Jan. 4, 2019. An arrest was made in the case of a patient being raped on Jan. 23, 2019. (Ross D. Franklin/AP Photo)

A male nurse who worked at Hacienda Healthcare in Arizona was arrested on Jan. 23 in the rape of an incapacitated woman who shocked staff at a Phoenix facility by giving birth just after Christmas.

Phoenix officials confirmed in a press conference on Wednesday that an arrest had been made, following a weeks-long investigation that included procuring DNA samples from male staffers at the facility, and two days after the two doctors who cared for the woman were either suspended or had resigned.

Phoenix Police Chief Jeri Williams said that Nathan Sutherland, 36, was a licensed nurse who had worked at the facility since 2011.

He’s expected to be charged with one count of sexual assault and one count of vulnerable adult abuse. He was booked into the Maricopa County Jail. Sutherland did not answer any questions from investigators following his arrest.

“Our officers took this crime to heart. This is a facility that you should be safe in and someone wasn’t,” Phoenix Mayor Thelda Williams said.

Sutherland “committed this unspeakable act when he assaulted one of the most vulnerable members of our community,” Chief Jeri Williams added. “From the minute we first became aware of this crime we have worked virtually nonstop trying to solve and resolve this case. The investigation was and still is the highest priority of our department.”

The DNA sample from Sutherland was linked to those taken from the baby and the baby’s mother.

The investigation includes trying to figure out whether Sutherland assaulted any other people inside the facility, according to Phoenix police Sgt. Tommy Thompson.

She urged paramedics to rush to the scene while at another point stating, “One of our patients just had a baby, and we had no idea she was pregnant.”

The 911 dispatcher then asked the nurse how far along the mother was in her pregnancy but the nurse didn’t know.

“This is a complete surprise. We were not expecting this,” the nurse said.

About five minutes after the call, the caller told emergency services that the baby was breathing.

Woman Not in Coma

For weeks the woman who gave birth was described as being in a vegetative state but a lawyer for the woman’s family finally corrected the description on Jan. 18.

It’s not clear why it took so long for the family to make the distinction.

“The important thing here is that contrary to what’s been reported, she is a person, albeit with significant intellectual disabilities. She has feelings and is capable of responding to people she is familiar with, especially family,” Micheaels said.

The family responded about 10 days after the birth to convey their surprise at the woman giving birth.

“The family obviously is outraged, traumatized and in shock by the abuse and neglect of their daughter at Hacienda Healthcare,” the attorney said in a statement sent to media outlets on Jan. 8.

“The family is well aware of the intense news and public interest in their daughter’s case, but at this time is not emotionally ready to make a public statement. The family would like me to convey that the baby boy has been born into a loving family and will be well cared for.”

Officials of the San Carlos Apache tribe, whose reservation is in southeastern Arizona, said the woman was an enrolled member of the tribe.

“On behalf of the tribe, I am deeply shocked and horrified at the treatment of one of our members,” tribal chairman Terry Rambler said in a statement. “When you have a loved one committed to palliative care, when they are most vulnerable and dependent upon others, you trust their caretakers. Sadly, one of her caretakers was not to be trusted and took advantage of her. It is my hope that justice will be served.” 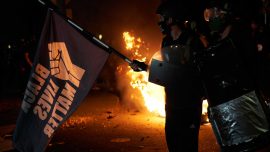 A True Account of What’s Going on in Portland